Connecting with the past through folk art furniture

Folk Art Furniture - Connecting with the past through folk art furniture - In a post-industrial society, the move back toward handmade and homegrown items has seen a massive resurgence as people seek to disconnect with the soullessness of mass-produced, homogenised products.

Folk Art Furniture – Connecting with the past through folk art furniture – In a post-industrial society, the move back toward handmade and homegrown items has seen a massive resurgence as people seek to disconnect with the soullessness of mass-produced, homogenised products.

Perhaps as an illustration of this emerging appreciation, was when in 2014, for the first time in British history, a national exhibition was held at the Tate Britain, specialising in British folk art. To find out more about folk art or Wallrock special pieces please enquire.

The term Folk Art is defined in the dictionary as, ‘artistic works, as furniture, paintings, sculpture, basketry, and utensils, produced typically in cultural isolation by untrained often anonymous artists or by artisans of varying degrees of skill and marked by such attributes as highly decorative design, bright bold colors, flattened perspective, strong forms in simple arrangements, and immediacy of meaning.’

While some folk Art was designed simply for decoration, the majority was created for utilitarian purposes, as it was a way for both creative expression and lifestyle improvement amongst these communities.

Folk Art was often an artistic representation of a culture and society. One of the beauty’s of Folk Art is that it tells us a story – it allows us in a contemporary age to view the world through the eyes of a specific piece’s maker, their society, culture and time and place in history. The naivety  of design and imperfections characteristic of folk art resulting from the lack of professional training by these craftsman, has produced simplified and beautiful objects  that tie beautifully with contemporary design.

While collectors of folk art vary in age, it holds strong appeal for younger generations, and it is perhaps because of its beautiful simplicity in an increasingly complex world that it holds such a connection for young people. The creation of “folk art” as a commonly accepted genre of artwork did not occur until the late 19th century with the arrival of the Arts and Crafts movement. During this period, Post-Industrial Revolution city dwellers began to crave a deeper connection with the rural life of their forebears. William Morris, who led the Arts and Crafts Movement, defined folk art as ‘anything exhibiting cultural heritage in a non-elitist, primitive or homemade style.’ This primitive form of art has come to inspire much contemporary art and appeals enormously to many architects and interior designers for the uber modern home.

Though cultures all over the world have created items that fall into the general definition of folk art provided above – the modern, western use of the word excluded all but rustic European cultures on the grounds that the ancient Greeks, Romans, Chinese, Japanese and so on were “too sophisticated” to be considered folk art.

Scandinavia had a particularly strong culture of communal eating and drinking which influenced folk artists to create objects that aided in these activities. Items such as jugs, vessels, leather tankards, horns, dry storage boxes, baskets, breadboards shaped like farm animals, and nutcrackers were all commonplace utilitarian décor. In fact much of what is depicted through folk art are everyday objects in large or naive form and were among other things a means of communication for populations that may have been largely illiterate.

England, France, Germany, Austria and Ireland all developed beautifully ornate candle holders, as candles were used daily for lighting in the 17th and 18th centuries. Though not originally intended to be art, carved and painted shop signs and implements are now considered valuable collectibles. This resurgence a result of a need in us to remember a simpler time where people were connected to the local community – a nostalgia for the pre-globalisation era.

Many of the pieces that remain today are examples of gifts given to newlyweds such as the window surrounds in the image below which depict a pair of carved love birds at the top, symbolising love – marriage settles. These window surrounds appeared in the Pushkin House London Exhibition in June 2009, which was designed to shed light on folk art and aid in its preservation and protection around the world. 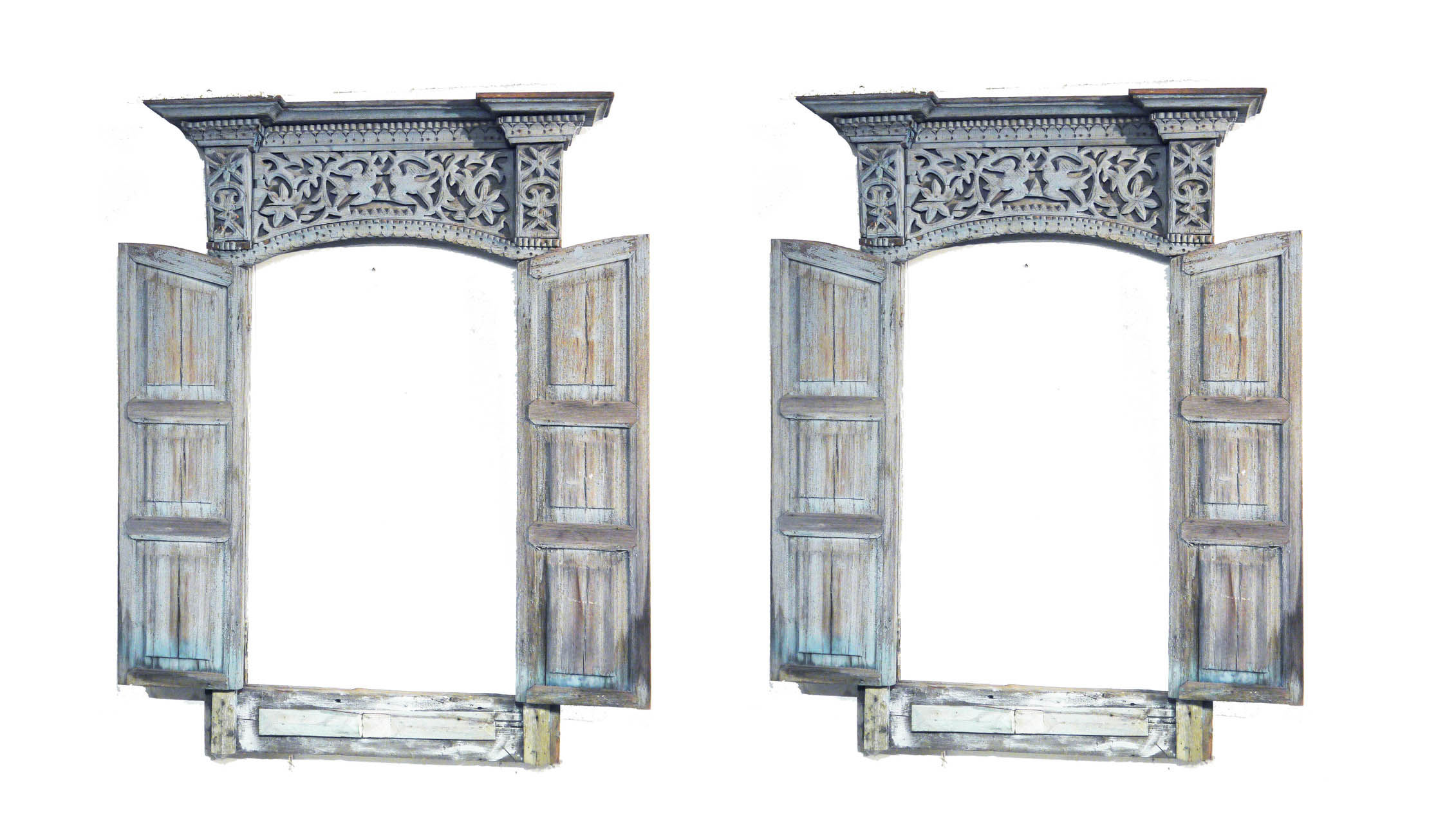 These carved timber window surrounds were a feature of Russian, particularly Siberian rural architecture and were imitated by rural builders from urban stone architecture during the 18th and 19th centuries. Many of these surrounds were carved with symbols of protective magic, while others were tokens and gifts of love for newlyweds. In the late 19th century they became status symbols for wealthy merchants who could afford to imitate their wealthy urban contemporaries.

Two regions had an especially strong influence on the folk art movement of central Europe: the Rhineland and the Alpine regions. Rhineland’s Folk Art is heavily influenced by the motifs associated with the wine region, such as metal bottle carriers and confectionaries. The alpine regions, consisting of Appenzell in Switzerland, the Tirol in Austria, and the Alto Adige in northern Italy, are suggestive of a mountainous rural backdrop with farming motifs, ceremonial foods.

Throughout France, the Netherlands, and Germany, folk artistry tended to be more sophisticated due to the populations exposure to the urban cultures that developed in the cities surrounding.