How is it possible that a piece of French Louis XV Furniture, a product of 18th and 19th century France could still be relevant in modern interiors? Louis Quinze, or Louis XV, is arguably one of the most favoured furniture styles in history – one that remains not only relevant today, but also highly desirable.

First established as a furniture style from 1730-1760, French Louis XV furniture was most commonly associated with opulence. This style took its name from the French King Louis XV, a sovereign besotted by beauty, which lead to a lifetime of excess inherited from his great-grandfather Louis XIV and his uncle Philippe Duke of Orleans, who was regent of France for the first 8 years of Louis’ reign. Louis XV was also heavily influenced by his mistress Madame de Pompadour who was famous for her patronage of the arts, in particular Sevres Porcelain.

These influences were combined with the power of an absolute monarch to spend state money, so it is hardly surprising that 18th century France gave rise to some of the finest furniture designers and designs in history, including Boulle, Riesener, Gantrex, Dubois, Lacroix and many more.

There were tight rules and regulations around furniture design during the Louis XV reign, and specific guilds were set up to govern and maintain the strictest quality and design standards in craftsmanship. As a result of this, the furniture produced was of extremely high calibre. This fact, combined with the historical prominence of the age of Louis XV furniture, has resulted in the furniture becoming a very valuable commodity today.

It is not only the 18th century however, that can lay claim to high quality furniture. Louis XV furniture was revived again by Empress Eugénie, wife of Napoleon lll, Emperor of the French from 1853 – 1871, and it has been reproduced ever since. It is no secret that as the 19th century wore on and the industrial revolution took hold in Europe, a wider section of the community became more affluent and able to take pleasure in the niceties of polite society. Included in this was a penchant for furniture. Louis XV, Second Empire, Louis XVI furniture and much English furniture were now being produced at a great rate.

For those who could afford it, furniture design and manufacture was perhaps at its historical peak in terms of quality. Cabinetmakers were still trained and skilled in 18th century furniture design and cabinet-making and yet, machinery was now used to further enhance these skills, resulting in a superior product. The high quality pieces of the latter half of the 19th century are outstanding examples of Louis XV and still highly desirable and coveted today. It is, of course, important to understand that not all 19th century furniture was of this fabulous quality, and it’s for this reason that a Certificate of Authenticity must be sought and a reputable dealer consulted when buying these antiques today.

Sadly, the early 20th century saw a general decline in cabinetmakers skilled in the old methods, and the irresistible lure of mass production was beginning to take over. In general, the decline of quality craftsmanship around the world gradually led to a market flooded with poor quality mass-produced product. 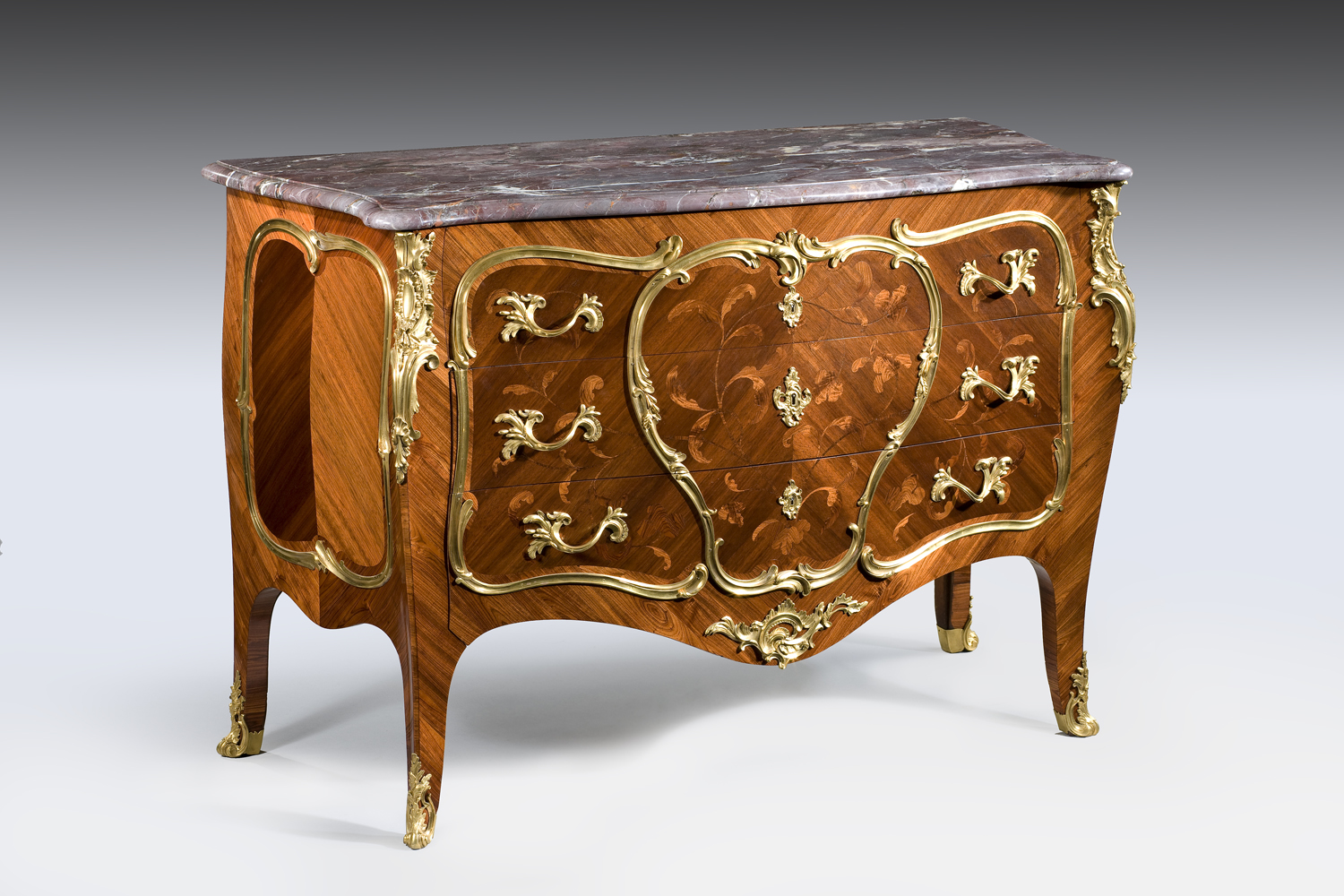 Testament to the popularity of the Louis XV style is the longevity of its production through the centuries. Famous for its asymmetry and curving lines, the design is perfect for providing relief within modern and classical interiors that might otherwise be overly structured.

In contrast to its original application during the 18th and even 19th centuries, (which would today appear overly extravagant), the key to its success in a modern context is its more subtle use. Formal furniture designs were produced to fit with the city townhouses as relaxed and comfortable designs were developed for the provincial chateaux of the nobility and upper classes.

It is exactly these qualities that lend Louis XV furniture to a wide range of modern décors. While the designs are still associated by some with extravagance, there are significant and beautiful examples of provincial Louis XV furniture where comfort takes precedence.

The more formal examples of the time work wonders within interiors that are sleek and require a touch of glamour; only a contemporary fabric is required to transform them from the 18th century to 21st century ready. Equally, the provincial designs are soft and feminine and with linens and casual fabrics are ideal in our more relaxed modern lifestyle.

With its high quality craftsmanship, grandeur and beauty, it’s easy to see why French Louis XV furniture has stood the test of time, and remains so desirable today.